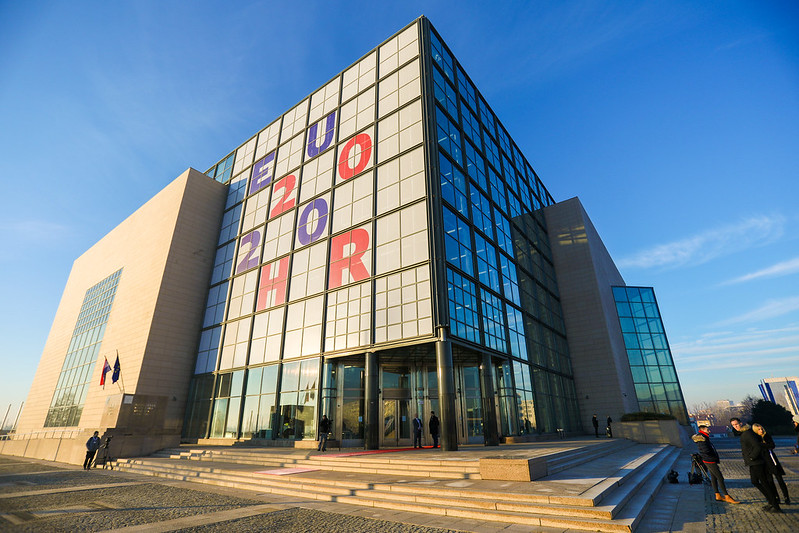 The National and University Library in Zagreb (Croatian: Nacionalna i sveučilišna knjižnica – NSK) is the Republic of Croatia’s central hub of learning. The library contains texts from throughout the rich history of the Croatian written word. It is a special place for many students and citizens, offering the perfect atmosphere for reading and research.

After changing addresses several times since the beginning of the 17th century, in 1995 this academic institution finally moved into its present home: a modern building built to meet its needs.

The library is constantly collecting new material, making it the national reference institution for the preservation of Croatian and international writing on culture, science and education.

The building’s contemporary architecture blends external and internal spaces into a continuous whole. The interplay of stone, metal and glass emphasises its simplicity. The glass lobby offers a panorama of Zagreb which, with the dramatic backdrop of the Sljeme peak, is one of the most beautiful views in Croatia. Upon entering this lobby, the visitor immediately discovers the structure of the library’s interior, with its six levels of user space.

Take a walk through the library

Šubićeva Conference Centre (29 Šubićeva Street) is the second official venue of the Croatian Presidency of the Council of the EU in addition to the National and University Library. This building is of a great importance for the modern Croatian history and the period of secession from the former SFRY. Namely, after the bombing of Banski Dvori (executive power centre) on October 7 1991 by the so-called Yugoslavian National Army, for security reasons, the session of the Croatian Parliament was held in the basement of the building in Šubićeva Street in Zagreb. The day after, on October 8 a historic decision of the independence of the Republic of Croatia was voted, severing all relations with the former Yugoslavia. This day was celebrated as the Independence Day until the last year and now it is celebrated as the Day of the Croatian Parliament.

By holding a part of the Presidency events in the premises of this historic hall, we connect the very beginnings of the independence of the Republic of Croatia with this significant moment for our country when we, as a member of the European Union, preside over it.